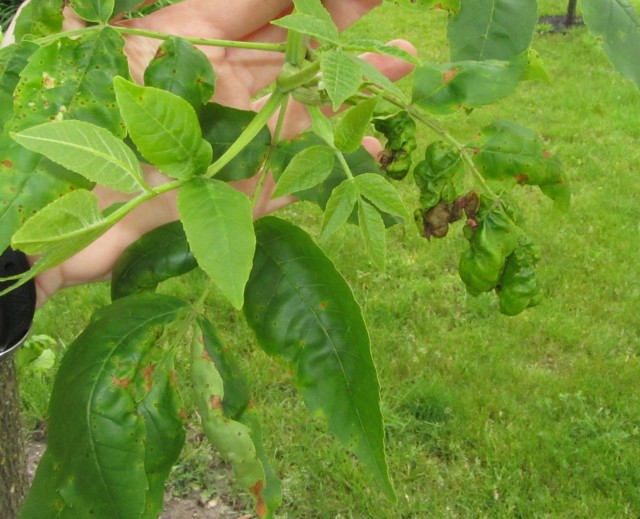 Foliar diseases such as Anthracnose can be seen on deciduous trees in the landscape, especially on maple, ash and oak.  The fungus infects leaf tissue as it is emerging, especially during cool, wet springs.  Fungal infection causes some distortion and necrosis.  Infected leaves usually remain functional.  Symptoms will be masked by the emergence of the second flush of leaves.

For great images and management information check out our free scouting App Bugfinder, on Apple and Google Play.

The Crop Protection Guide for Nursery and Landscape Plants (OMAFRA publication 840) contains the crop pest recommendations for nursery and landscape.  Download it onto your phone or computer for easy reference.

Seeing malformed, stunted leaves with brown-black marginal necrosis on container grown lilac (Syringa spp.)?  This is due to a combination of low temperature injury and a weak bacterial pathogen, Pseudomonas syringae. It is quite common on the first flush of leaves of container grown lilac and plants usually grow out of it to put on a more normal-looking second set of leaves.

Leaf  spots on deciduous flowering shrubs are showing up because of the cool, wet conditions we had during leaf emergence.  Leaf spots appear as purplish to brown, with yellow to brown necrotic margins.  Several fungi (Colletotrichum, Septoria etc. ) cause leaf spots on ornamentals. When the second flush of leaves start to emerge in overhead irrigated containers, you may want to protect new growth with a foliar application of fungicide (Banner, Heritage Maxx, Palladium, Nova, Daconil, Dithane). Once container grown stock is planted in the field, the disease symptoms diminish. 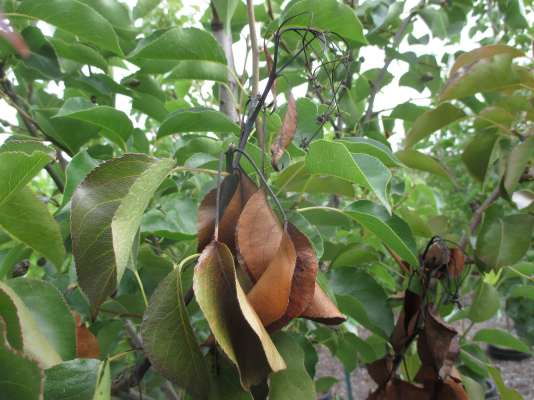 Fireblight is a systemic bacterial disease that causes twig and branch dieback and bark cankers on large limbs and the main stem. It infects apple and pear trees through flower or through recent wounding (e.g. pruning).  It can also be found on mountain ash (Sorbus aucuparia).  It is a serious disease in juvenile trees but can impact small to medium sized trees in the landscape.  It is important to watch for late blossoms, called ‘rat tail’ blossoms, which are very susceptible to infection by this bacteria.  DO NOT PRUNE MALUS, PYRUS or SORBUS DURING THE GROWING SEASON to avoid introducing this bacterial disease into healthy trees. Protectant bacteriacidal products include Streptomycin, Copper and biological suppressants such as Kasumin, BlightBan, Bloomtime, Serenade.

Peach tree borer (Synanthedon exitosa) adults will be flying any day now. Look for cankered regions and chewed bark/wood in the lower stems of Prunus (e.g. Prunus x cistena) as a sign of larval damage.  These clear-wing moths resemble wasps and adult males are attracted to pheromone baited sticky traps.   Bark applications of insecticides (Delegate, Rimon) should begin when adults are found in peak numbers on sticky traps. Pheromone traps can also be placed outside of the Prunus crop, to attract frisky males away from your cherry plants.

WOOLLY BEECH APHID are feeding on beech. These aphids are small and green but they cover themselves with bright white, woolly strands and produce honeydew droplets that cling to the woolly masses. Populations are usually not threatening to tree health but applications of Insecticidal Soap can be very effective at reducing populations of young nymphs, especially when adequate spray coverage on LEAF UNDERSIDES.

Where HONEYLOCUST PLANT BUG was a problem in the past, monitor trees for tiny, green, wingless, nymphs (see above image).  Plant bug nymphs and adults were a problem in many areas last year as these sucking insects caused stunting, malformation, chlorosis and senescence of leaves (see lower image).   Shake new leaves over a white surface to assess populations of plant bug nymphs.  Most contact insecticides work very well against this pest. 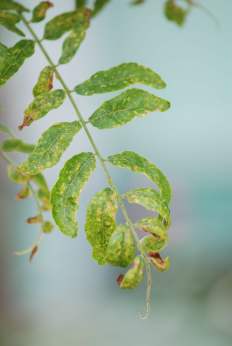 Reducing populations of honeylocust plant bug now is important since multiple generations will be cycling over the next few weeks.

Crawlers of Oystershell Scale have hatched in container production and will be starting to hatch in the field/landscape soon (adults shown above).  These crawlers are tiny and brown and very susceptible to insecticides including insecticidal soap and the summer rate of horticultural oil.  This scale species can be found on several deciduous trees including lilac, ash, magnolia, maple, hackberry, willow etc.

Are you seeing discoloured, blemish-like spots on the foliage of pear trees?  This is the Pear Leaf Blister mite (Eriophyes pyri). The mites overwinter under the outer bud scales where they feed on the developing buds. By petal fall, the mites will lay eggs and remain protected from predators within the leaf blisters. The mite is difficult to manage once it moves into the blister-like leaf domiciles it creates by feeding on the leaf tissue in the early spring.  This mite pest does not usually threaten plant health. Management of pear leaf blister mite is often timed for the fall to treat the mites while they are in the outer bud scales.

Brown shoots on juniper may be a symptom of juniper tip blight (Kabatina blight). A small grey band or pinched grey canker with black fruiting structures can be found at the base of the infected shoot, this is where the spores come from. Pruning is not suggested once new growth appears, as it will help spread this disease. Where cankers are found, copper and Dithane are registered to protect emerging new growth this spring and summer.

Fletcher scale (Taxus scale) nymphs are actively feeding on Thuja and Taxus and are getting larger.  They have a distinctive white stripe down their backs.  You will probably notice the honeydew first.  This scale is difficult to manage at this size but an application of systemic insecticides (Cygon, Orthene in the nursery) may help reduce populations in hot spots.  It is entering its most rapid growth/feeding phase.

Crawlers (photo above) and nymphs (photo below) of Pine needle scale can be found on white/mugo/Scots pine at this time in CONTAINER production and some Southwest facing landscapes.

Euonymus scale (Unaspis euonymi) is a tiny little armored scale that covets evergreen Euonymus fortunei in the garden or landscape.  Newly hatched crawlers (above) are orange, the crawl slowly over the plants looking for some juicy tissue to settle and feed on. Crawlers and newly settled nymphs are susceptible to insecticides, including insecticidal soap, the summer rate of horticultural oil, Lagon and Orthene.  Kontos is a new insecticide for Euonymus scale that can also be used as a container soil drench (a great alternative to foliar spraying).

These pine bark adelgid nymphs will be moving to feed on emerging foliage and will cover themselves in a woolly coating soon, making them much less susceptible to contact insecticides.  Avoid using horticultural oil on white pine as it will dull the glaucus sheen to the needles.  Other options include insecticidal soap, acetamiprid, dimethoate, malathion.

Where needles on Mugo/Scots pine are disappearing, look closely for dark headed European pine sawfly larvae (Sawflies have >6 pairs of prolegs) with long stripes down their body.  They can sometimes be found on Eastern white pine.   Young sawfly larvae are susceptible to applications of insecticides such as Success, Pounce/Dragnet, Tristar.

Yellow headed spruce sawfly adults are emerging and starting to lay eggs on emerging foliage of Colorado and white spruce.

Watch for needle tips to turn straw-coloured as the first sign of 1st instar larval feeding of yellow headed spruce sawfly in the next week or two. (Sawflies have >6 pairs of prolegs). The smaller they are, the harder they fall. Effective insecticides include Success and Pounce.  Insecticidal soap can give good suppression if coverage is excellent.

Whew! You made it!
Listen HERE to one of my favorite field dwelling birds….the Indigo Bunting (photo: Audubon.org).  They have become a lot more common in urban areas.  Have you been hearing this bird singing and wondered “what is that bird?”. Now you know 🙂