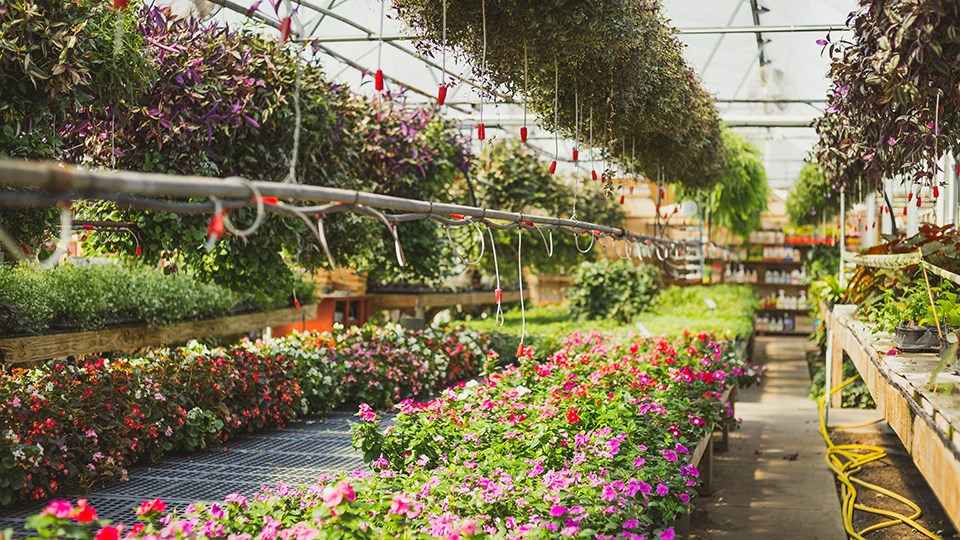 Environment Canada is calling for sunshine and highs in the mid-20’s C by next weekend.  Get our your sunblock Ontario, this is happening!

If you are referring to the Phenology and Monitoring tables in OMAFRA publication 841, Guide to Nursery and Landscape Plant Production & IPM, look at the Tables starting with 2-3 on pg. 39.  This puts us at about 55-90 GDD Base 10C in areas south of Hwy 9. Areas in the southwest corner of the province will be more advanced.

The Crop Protection Guide for Nursery and Landscape Plants (OMAFRA publication 840) contains the crop pest recommendations for nursery and landscape.

Want to make this even easier?  Get your free download of BugFinder on Google Play or Apple.

Nursery and Landscape This Week:

There are several example of low temperature injury (such as the desiccated foliage of Euonymus fortunei ‘Emerald Gaiety’ above) in the nursery and landscape after the recent round of freezing temps over a week ago.  Not to worry, just plant and watch new buds breaking, more will form to break in June and hide naked stems and persisting dried leaves.  {Nursery: For those crops growing in container production, apply broad spectrum fungicides (e.g. Dithane, Copper) in the hours following the low temperature event to protect against anthracnose and blights that may follow under overhead irrigation.}

In production nurseries where black vine weevil larvae are a problem in container crops (e.g. perennials, evergreens), monitor containers for larvae and pupae.  Always inspect incoming container nursery stock before incorporating into production areas. Treat container media with Heterohabditis bacteriophora (H.b.).  This should result in a significant reduction in populations in under two weeks.  Order your nematodes in advance.  Since Heterohabditis nematodes require moist, warm soil, we find that they work best in container production (than in field).

Monitor boxwood foliage for boxwood psyllid nymphs as the Cercis canadensis begins to bloom, Acer platanoides are in late bloom and Magnolia x soulangeana are dropping petals.  Boxwood psyllid eggs hatch just as buds are starting to break and expose tender new shoots. Psyllid nymphs are yellow-green and blend in very well with new growth of boxwood. Their feeding causes cupping and distortion of new growth. Spray with insecticidal soap or contact insecticides at first sign of bud break and repeat 2-3 times to suppress populations of hatching psyllids. Systemic insecticides, such as dimethoate, are registered for use in commercial nurseries.

Box tree moth (Cydalima perspectalis) has been detected in residential areas of Etobicoke region of Toronto on boxwood.  Look for tiny green larvae with black heads feeding on the surface of leaves at this time.  Xentari and Dipel are registered as effective biocontrol insecticides for the active larval stage of this pest and should be considered as a larval treatment by the end of May (when larvae are more actively feeding and susceptible to B.t.).

Where dogwood (Cornus spp.) has had issues with fungal leafspots (e.g. Septoria) in the past, protect emerging foliage with fungicides before precipitation or irrigation events as the Amelanchier sp. and Cercis canadensis are blooming.  Leafspots are often circular or angular with a bright purple border, making shrubs look unsightly by early summer.

Birches with a history of bronze birch borer infestation should have been pruned by now to prevent spread of this pest. Its a good idea to avoid pruning susceptible birch (especially Betula pendula) when the black locust trees are blooming (emergence of adults) to prevent extra attraction of these borers. Symptoms appear as branch tip death, branch death and death of the leader and progresses quite quickly. Destroy pruned material to prevent emergence of beetles. Natural resistance to this pest can be enhanced through activities that improve plant health, such as light fertilizing (May, October), irrigating and removing any weeds and grasses that provide competition for the tree. Betula pendula is most susceptible to this pest and should be avoided in areas of known BBB infestation.River birch (Betula nigra) and its selections have been shown to be quite tolerant to BBB attack.

Once ash trees have leafed out and bloomed, injectable insecticides may be used to protect the trees from new infestations of Emerald Ash Borer (Agrilus planipennis). Trees must be actively transpiring in order to maximize insecticide uptake into the cambium. Registered injectable insecticide products include: AceCap 97, IMA-jet and Tree-Azin.  The regulated areas for EAB outlines restrictions on the movement of all ash species (Fraxinus sp.) materials and all species of firewood from these regulated areas of Ontario and Quebec. It is a good idea to avoid pruning susceptible ash trees when the black locust trees are blooming (emergence of adults) to prevent extra attraction of these borers.

Take a look at the roots of poor looking evergreens (Thuja, Picea, Pinus, Syringa) and field grown ornamentals and look for populations of European chafer, May/June Beetle larvae and other white grub species in the soil. Sandy soils are especially hospitable to white grub species.  Preventative applications of Intercept (imidacloprid) and Acelepryn (chlorantraniliprole) are registered for white grubs (nursery production) and the application period is in June and July (during the adult flight period). Beneficial nematode applications are not recommended this time of year and are much more effective when applied to early instar larvae, mid-August.

Boxwoods in the landscape looking off-colour coming out of the winter?  Can you see any yellow blister-like spots on the leaves?

Carefully break open the leaf with your knife or finger nail, look for tiny yellow-orange LARVAE inside.  These are boxwood leafminer larvae and they will be pupating soon.  The tiny orange midge adults will be emerging out of these leaves when the new growth emerges (usually late May-early June).  Adult midges will be laying their eggs on newly emerged leaves in a couple of weeks or so and those eggs will hatch into the next generation of leaf miners.  Treating new foliage with insecticides (e.g. Avid is registered in nursery production) just prior to or at the beginning of leaf emergence can help reduce successful egg hatch and leafminer establishment.  You can also prune out new foliage in August and the clippings will desiccate, making it impossible for the leafminer to complete its lifecycle.

Where Ironwood trees (Ostrya virginiana) were infested with anthracnose spots last year, you may consider an application of broad spectrum fungicide (e.g. copper) as buds start to swell. The usual symptoms caused by this fungus, Apiosporopsis carpinea, are irregular necrotic spots ranging in size from pinpoints to 5-6 mm in diameter. They will increase in number and coalesce during the season and will cause marginal and apical browning, curling and leaf cast.

Black knot is easy to see on Prunus sp. at this time. Monitor gardens and adjacent wild areas for Prunus shrubs and trees for large black growths on previous years twigs. If you have the time to prune, prune the cankers out, back quite close to the main stem BEFORE LEAVES EMERGE. Destroy all pruned twigs (and spray pruning wounds and tools with rubbing alcohol). Pruning too shallow retains the undetectable, developing canker on the tree and does nothing to limit the disease. Fungicides may give some suppression when sprayed at green tip, pre-bloom and blossom time. Fungicides include Daconil and Maestro. Fungicides need to be applied ahead of precipitation events during bloom and shoot emergence In the nursery/orchard, Daconil has been shown to be the most effective fungicide. (Fruit-bearing mature Prunus: Daconil cannot be applied after shuck split or fruit will be injured). For more information: http://www.omafra.gov.on.ca/english/crops/hort/news/hortmatt/2003/03hrt03a4.htm

Where honeylocust podgall midge was a problem in the past, monitor trees for overwintered adult midges soon. These adults will be emerging as the buds start to swell. Adults will be laying eggs on buds in early spring (reddish eggs on buds and new leaves). Research in Oregon suggests that delayed dormant oil applications targeting the first couple of egg clutches can help reduce the incidence of pod gall midge. This involves applications of product early in the season, starting before foliar emergence.

Where foliage is starting to emerge on honeylocust, monitor for newly hatched nymphs of the honeylocust plant bug.  You can find them by shaking branches over a light coloured surface and examining it for fallen nymphs.  By controlling the first generation of nymphs, you can really reduce the damage from this pest.

Eastern tent caterpillars have hatched and these black fuzzy larvae are feeding and making webby tents in branch crotches. The larvae can cause severe defoliation in May, where populations are high. Try an application of the biological insecticide B.t (Dipel, Foray) on the foliage during the evening hours. Larvae will turn black and die approximately 3-5 days after eating the B.t. residue on the foliage.

Gypsy moth larvae have begun to emerge  and are blowing to new hosts (when trilliums are in bloom), some control can be achieved using Bacillus thuringienesis (B.t., Dipel, Foray) and spinosad (Success) insecticide in the first 2 weeks after egg hatch.  We are seeing moderate-high populations of egg masses this spring in many areas 🙁

[Some keen homeowners can install a burlap skirt at the base of the tree to create a shady, protected area for Gypsy moth larvae to hide during the day (this behaviour usually peaks near the end of May/early June). Homeowners will need to inspect burlap skirts and underlying bark crevices daily (1-3 pm is best) and remove/destroy larvae. Sticky bands around trunks during the June/July flight period will help prevent females from laying eggs above sticky bands and will attract males to the sticky surface.]

Viburnum leaf beetle eggs are hatching and larvae can be found feeding on lower leaf surfaces (upper photo above).  Look for raised bumps on the undersides of 1 and 2-year-old twigs. The bumpy caps can be picked off to reveal the yellow egg casings underneath. Larvae are vulnerable to chemical control only during the first 7-10 days after hatch. Larvae feed on the interveinal tissue from the undersides of the leaves, causing small holes in leaves (lower photo above), which later become much larger holes once larvae grow bigger.  Target leaf undersides for any insecticidal applications (Success, Flagship, horticultural oil).

Perhaps you don’t quite recognize this little persistent songster, the House Wren, but I can guarantee you that you have heard him sing.  He is very territorial and will sing energetically from dawn to dusk.  A common renter in your nest box, the house wren loves to nest in nesting boxes that hang under the lower edge of tree canopies or up against the main trunk.