Remember this?  This is what apple scab can do to many of our older, susceptible apple, crabapple, hawthorn cultivars after cool, wet springs.  Disease inoculum (sporulating structures called “pseudothecia”) can be found inside overwintered fallen leaves from 2020, waiting for enough heat and moisture to be able to be fertilized, mature and release infective two-celled “ascospores” in the rain and wind. (If you inspect old apple leaves, the pseudothecia resemble black dots.)  If we get another cool spring with frequent precipitation during leaf emergence periods, we could be heading into another perfect storm for disease. 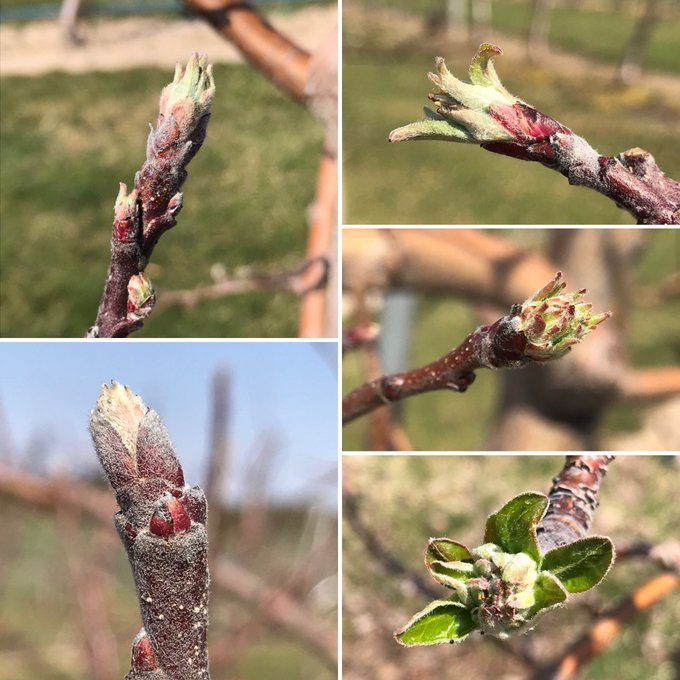 For MORE information on fruit tree production and pest management, Check out the ONFruit blog post on apple diseases

Apple Scab (Venturia inaequalis, on crabapple/apple/hawthorn/mountain ash, see photo above) and Fireblight (Erwinia amylovora, on apple & pear, see photos below) diseases will being sporulating and infecting green tissue and flowers starting at bud swell and green tip.  Fireblight is most infectious starting around the beginning bloom (including re-bloom) of apple and pear, but the infection period can last weeks and be facilitated by pruning or other wounding events, such as wind and hail damage.

Management programs are different for each disease.  This is because:

FIREBLIGHT.  Floral applications of products for Fireblight (such as copper, Kasumin, streptomycin) should begin at early bloom and continue throughout the bloom period to reduce numbers of Fireblight bacteria on floral structures (stigmas).  The floral stigmas are the main entry point for Fireblight into the tree.  Secondary summer infections may be possible in June/July where storm damage (e.g. hail, wind) has occurred, creating wounds for entry of Fireblight bacteria into new branches.

And don’t forget those Gymnosporangium rusts: